Trending
You are at:Home»Current Events»Watch: President Trump Tells Governors that Obamacare Will Be Repealed and Replaced

President Trump addressed 46 state governors at the White House Governor’s Ball and flat out told them that he will repeal and replace Obamacare. He said the replacement plan will be something “very, very special”.

“As most of you know, Obamacare’s had tremendous problems,” Trump said. “We’re going to have it fixed, and we’re going to repeal and replace. And I think you’re going to see something very, very special.”

So there you have it! Despite all the non stop commenting from many saying Obamacare will never be repealed it is hard to imagine Trump not backing up his words on this. Everyday you can find some story saying Obamacare won’t be repealed. Even former house speaker John Boehner recently said the Congress will never repeal it. Let’s hope he is 100% wrong!

Watch: John Boehner saying they will only ‘fix’ Obamacare not replace it

President Trump is always working. During his brief remarks he commented that new Health and Human Services Secretary Tom Price was attending the ball and if any of the governors wanted to discuss Obamacare and the replacement to have at it right then and there! Amazing!

It is so refreshing and historic seeing a ‘non-politician’ running the country. Enjoy these times while you can! The President was joined by his wife Melanie and daughter Ivanka with her husband Jared at the dinner. 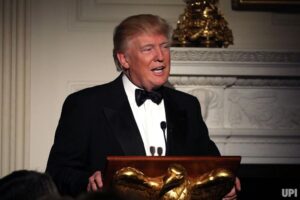