The United States already seems upside down from the COVID-19 disaster and now this news…numerous US police departments have accepted and deployed drones from the Chinese, Shenzhen-based, company DJI Enterprise.

Ask yourself ‘why’ would a US police department accept drones from a Chinese company, especially at a time like this? And according to script (are you surprised???) but the Battle Creek Police Department and Kent County Sheriff’s Department in Michigan are happy to accept such gifts.

Now, what would they use said drones for? Well, of course, their intentions are NOT what you may be thinking! No, no the police in Michigan would never use Chinese drones to watch over and spy on people right?

“As far as patrolling the streets and shouting messages … that’s not what these are for,” Kent County Sheriff’s Department Lt. Joel Roon told the news station.

“I think it’s important for people to understand that this is a program that’s existed for over two years now here at the sheriff’s office,” Roon said.

Lt Roon stated it was an opportunity to good to pass up accepting the free drones from DJI.

Four DJI Mavic 2 Enterprise drones were donated to the Kent County Sheriff’s Department adding to the drones they already had in use. 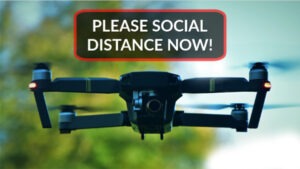 Question for you! Is this the kind of America we want and are willing to accept? Where police use drones to watch over us to make sure we are ‘complying’ with our ‘rulers’ edicts? Does the Constitution address this type of situation? We bet it does.

What do you say? Would you be ok with this type of behavior from your local police? Police forces all over the world are regularly using drones.