Trending
You are at:Home»Current Events»Rep. Ryan Zinke Confirmed by Senate as Interior Secretary

Today the Senate approved the nomination of Rep. Ryan Zinke (R.-Mont.) as President Trump’s Interior Secretary with a vote of 68-31. He will be the United States 52nd Secretary of Interior.

Zinke, a former US Navy SEAL Commander, has been a U.S. Representative in Congress from the state of Montana since 2015. He was the first former SEAL to be elected to the U.S. House of Representatives.

Rep. Zinke is considered a great outdoorsman and supporter of keeping public lands open for recreational use by the people.  Zinke was reportedly the favorite of Donald Trump Jr. who also is passionate about the use of public lands for outdoor recreation.

The influence of Trump Jr.’s hunting passion and conservationist ways has heavily favored Western State candidates in the search.

Trump Jr. is a regular member of the Boone and Crockett Club, a hunting and wildlife conservation organization co-founded by Theodore Roosevelt in 1887. Club chief of staff Tony Schoonen confirmed to CNN that Trump Jr. is one of the 100 regular members of the group, all of whom are vetted and voted on by the other members, and are “individuals of influence in the worlds of science, education, industry, and politics.” Trump Jr. is the youngest member voted in. – Read More at CNN

Getting valuable input from people who are passionate about a subject is one of the great traits of President Trump. Of course, when your son is an avid outdoorsman who better to listen to on the subject of Interior Secretary! 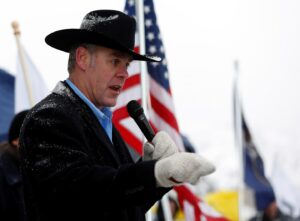