Trending
You are at:Home»Current Events»Navy SEAL Killed in Somalia! 1st US Combat Death There Since 1993

A US Navy SEAL was killed during a firefight in Somalia and two others were wounded.

“U.S. forces were conducting an advise and assist mission alongside members of the Somali National Army” near Bari, about 40 miles west of Mogadishu, according to a statement from U.S. Africa Command. The mission involved the use of U.S. helicopters and a Navy SEAL assault force partnered with Somalis.

“This was their mission,” said Pentagon spokesperson Capt. Jeff Davis, referring to the Somali troops.

The SEALs were attacked “early” in the mission, not long after landing, and the Pentagon was still assessing if the mission — targeting a “group of people” associated with attacks on Somalia’s capital — was a success. Despite a recent focus on the country by the Trump administration, the authority for the mission was given under orders issued by the Obama administration. – Fox News

Sad news and brings a reminder that our forces are ‘out there’ fighting and dying on our behalf everyday.

Featured image of a Somali soldier on patrol next to the burnt-out wreckage of a car that was used by suspected al-Shabaab fighters, April 16, 2017 by Getty Images 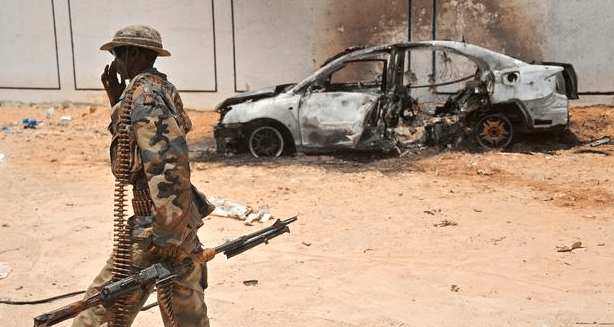