Trending
You are at:Home»Current Events»Kellyanne Shocker! Media in a Tizzy! See the Picture Here!

Well, depending on your viewpoint either the Trump administration is showing no class or it is just another day in the media’s war against the Presidency of Donald Trump.

Kellyanne was seen kneeling on the couch in the oval office instead of sitting in a normal fashion during a meeting with leaders of black colleges and universities.

Ok, after looking at the picture are you as shocked and dismayed as the media is making out to be? If you need anymore proof that the media will do anything and everything to try and destroy Donald Trump you are not paying attention.

Featured image by the Associated Press 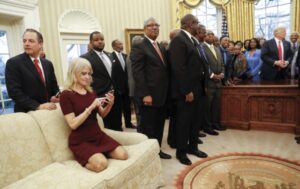 Kellyanne Conway sitting on her knees on the couch in the oval office during official meeting with leaders of black colleges and universities.