Trending
You are at:Home»Politics»General Flynn Fired – Defiant Until the End

Late Monday night President Trump asked for and received the resignation of his National Security Advisor former Lt. General Michael Flynn. Something just does not seem right with this whole thing. President Trump is known for his loyalty and standing by his man. So why all of a sudden did he asked for Flynn to resign late Monday?

In the final hours before his resignation, now-former White House National Security Adviser Michael T. Flynn said he “crossed no lines” in his discussion with Russia’s ambassador, but ultimately he was most concerned about the steady stream of leaks to reporters based on classified information.

“You call them leaks. It’s a criminal act. This is a crime. It’s not just a wink and a nod,” Flynn said.

“He [President Donald Trump] expressed confidence,” Flynn told TheDCNF, just hours before his resignation. “That’s when he told me that we need to go out and talk more. So I’m going to do that.” – Read More at The Daily Caller

It is very clear that this was a political assassination of Flynn by forces loyal to Obama. Obama fired Flynn when he was Director of the Defense Intelligence Agency. The contents of Flynn’s call with the Russian ambassador before Trump took office was leaked by someone in the Obama administration to be sure. They had it out for Flynn. They had already fired him once so they were out to make sure he did not last.

It is illegal for someone in the government to leak a conversation of a private US citizen to the public. Will we ever know who did the leaking? 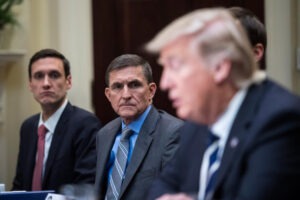 PHOTOGRAPH BY JABIN BOTSFORD / THE WASHINGTON POST VIA GETTY