Lt. Gen. Hal Moore, the Vietnam era commander made famous in the Mel Gibson movie “We Were Soldiers” has died at the age of 94. The movie was based on the book “We Were Soldiers Once and Young: Ia Drang – The Battle That Changed the War in Vietnam” written by Moore and Joseph L. Galloway.

“I just lost my best friend,” Galloway said from his home in Concord, N.C. “I remember that none of us would have come out of there alive if it weren’t for Hal Moore and his brilliance as a combat commander.”

Galloway said he now must keep a promise he and Moore made to each other years ago.

“I’ve got to tell you that he is having the last laugh on me, because 20 years ago he insisted that we shake hands on a deal that whichever died first, the other one had to preach his funeral,” Galloway said.

“I will get in my car Thursday and drive down to Auburn, Ala., from Concord, N.C., and on Friday afternoon at the National Infantry Museum at the memorial service for my best friend, I have the honor and duty of standing up and preaching his funeral. He lasted almost to 95. I was beginning to think he was going to outlive all of us.” – Read More at Stars & Stripes 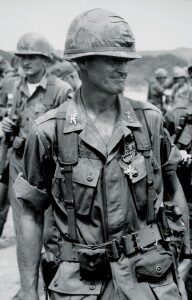 Photo of Col Hal Moore by US Army

Lt. Gen. Moore was known as a strong willed fearless commander who lead by example and greatly loved his soldiers. The movie with Mel Gibson starring as Lt Col Moore which came out in 2002 accurately portrays this true American hero and his devotion to duty. A graduate of West Point he served in Japan and during the Korean War as a regimental operations officer before deploying to Vietnam in 1965 and leading the 1st Battalion, 7th Cavalry Regiment in the Battle of Ia Drang,

Moore wrote a second book with Galloway called, “We Are Soldiers Still: A Journey Back to the Battlefields of Vietnam” which details their trip back to the hallowed grounds of Vietnam’s Ia Drang Valley forty years after Moore and his soldiers fought there. 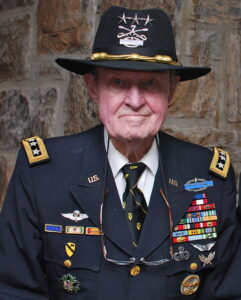 Lt Gen. (Ret) Hal Moore at the United States Military Academy at West Point on 10 May 2010. Photo by Ahodges7 – Own work via Wiki Commons

Moore and Galloway established the Ia Drang Scholarship Fund in 1994 with the goal of helping children and grandchildren of the veterans who fought in the battles of Ia Drang. The fund was started using money they earned from the book sales and speaking engagements.  If you want to help you can send checks to Ia Drang Scholarship Fund, c/o executive director, 1st Cavalry Division Association, 302 North Main, Copperas Cove, TX 76522.

Featured image of LTC Hal Moore, Commander of the 1st Battalion, 7th Cavalry, talking on the radio during the battle of Ia Drang Valley in Vietnam. Photo extracted from US Army motion picture footage (Nov 1965) by US ARMY.