Trending
You are at:Home»Current Events»Democrats Be Careful What You Are Trying to Do

More and more Democrats are now publically stating that the Trump/Russia/Flynn scenario is ‘worse than Watergate’ and they are even hinting that this will be the downfall of the Trump presidency. It is clear the Democrat party and their followers are determined to removing President Trump from office at all costs.

The absurdity of this line of attack on Trump is going to backfire on the Democrats more than they could image. The American people that voted Trump into office support him more now than ever and if the Democrats try to somehow remove Trump from office with the help of RINO establishment members of the GOP they will face the wrath of the Trump voters.

Democrats are instigating violence, protests and the disruption of American society because they lost an election. Beware Democrats, you are embarking down a dangerous path and you will not win this fight. You cannot win this fight.

Democrats are now acting like Communists. They thought the election was in the bag for them but they were wrong and now they can’t accept they lost and will literally do ANYTHING including destroying America to show their anger and dismay at losing. 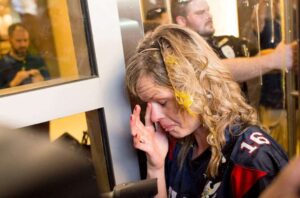 Photo of Trump supporter being egged at Trump rally by Noah Berger, AP

Democrats, the time is now for you to stop what you are doing. Stop the violence. Stop the protests. Stop the attempts to destroy America. Stop the madness right now before it is too late.

Featured image of President Trump pointing at the crowd as he walks pass the inaugural parade reviewing stand in the 58th Presidential Inaugural parade in Washington D.C., January 20, 2017 by Pvt. Gabriel Silva, US Army photo via Wikimedia Commons