Tonight President Trump gave a great speech. He will end up being one of the greatest Presidents in our history. Why? Simple. He will get more done than any other President by far. Put your comments below.

Trump discussed a variety of topics including that he will build the wall on the southern border, will repeal and replace Obamacare, will rebuild the military, will take care of veterans, will fight the drug epidemic in our country, will combat inner city violence and much more.

If you did not watch the speech to Congress live you should watch the replay. It is that good. Even his detractors said he did a great job with many saying tonight he truly became President of the United States.

The President called for unity between Democrats and Republicans saying that there is no issue we can’t fix, no problem we can’t solve if we work together so ‘let’s get it done.’

He started off the speech honoring African American history and culture and ended it with a call to all Americans to believe in themselves, to believe in America again and to dream big. 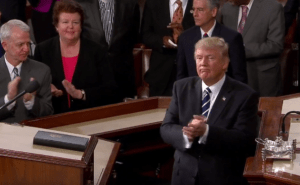