Trending
You are at:Home»Featured»President Trump States ‘Leakers Will Be Caught!’

President Trump publically announced today that the ‘leakers’ who released information to the press on communications between retired General Flynn and the Russian ambassador last December ‘will be caught’.

The spotlight has finally been put on the low-life leakers! They will be caught!

President Trump vowed Thursday to root out those responsible for leaking the “illegal classified” information that has fueled a string of damaging news reports on his administration, warning the leakers they “will be caught!”

“Leaking, and even illegal classified leaking, has been a big problem in Washington for years. Failing @nytimes (and others) must apologize!” Trump tweeted. – Read More at Fox News

Will Jeff Sessions take action and if so when? 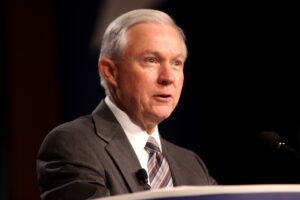