Trending
You are at:Home»Current Events»President Trump Destroys the Media in Must See News Conference

President Trump conducted a news conference today instead of Sean Spicer the White House Press Secretary. It was a press conference for the ages!

Trump briefly announced his new choice for the Secretary of Labor, Alexander Acosta and then jumped right in taking questions from a bunch of hostile reporters with only Russia on their minds. 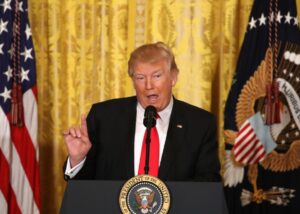