Trending
You are at:Home»Current Events»Drain the Swamp! Tillerson Cleaning House at State Department

Reports are that Rex Tillerson, the new US Secretary of State is starting to clean house at the State Department and it is about time! The State Department is notorious for being full of liberals and leftists that care more about their political agenda than the good of the United States. 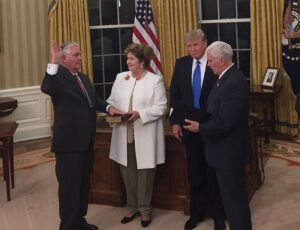 Many of those let go were on the building’s seventh floor — top-floor bigs — a symbolically important sign to the rest of the diplomatic corps that their new boss has different priorities than the last one.

“As part of the transition from one administration to the next, we continue to build out our team. The State Department is supported by a very talented group of individuals, both Republicans and Democrats,” State Department spokesman RC Hammond told CBS.

“We are appreciative to any American who dedicates their talents to public,” he added.

This week’s round of firings marks the second time State Department personnel have been cleared out since President Trump took office last month. – Read More at the New York Post

We don’t know for sure if this is President Trump at work or just normal changing of the guard but it has to be a good thing. This ‘house cleaning’ also needs to take place immediately at the Department of Justice and in our intelligence communities as they are both full of career leftists.

If Trump does not take immediate action to clear out the career liberals embeded in these critical departments it puts his very presidency at risk.

Featured image of The Harry S Truman Building in Washington DC. Headquarters of the US Department of State by Loren (Own work) [Public domain], via Wikimedia Commons