Ok, to them it makes total sense…Sean Hannity is hated almost as much as Donald Trump by the left and it is known that Sean has a concealed carry permit. So why not make up a story that he pulled a gun on Williams and even go into detail saying he used a red laser to target him.

Is anyone surprised that Juan Williams denies this happened? Apparently, Hannity showed his unload gun to Williams. End of story yet CNN takes it to a whole new level of lying in their attempts to make Hannity look bad.

(1/2) This incident is being sensationalized – everything was under total control throughout and I never felt like I was put in harm’s way.

(2/2) It was clear that Sean put my safety and security above all else and we continue to be great friends.

@CNN fake news lies. Juan is one of my best friends. Love u my friend. https://t.co/ZqXsRXWHDw

This is why we love CNN so much (yea, right)…they know they are lying and they don’t even care! Talk about bold!

The truth is though none of this is surprising anymore, it is expected these days from the media. We need to stop complaining about how biased the media is because it is a waste of our time and it just gives them more attention then they deserve. 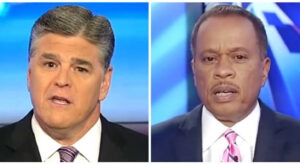